The Four Gifts My Son Gave Me Before He Died 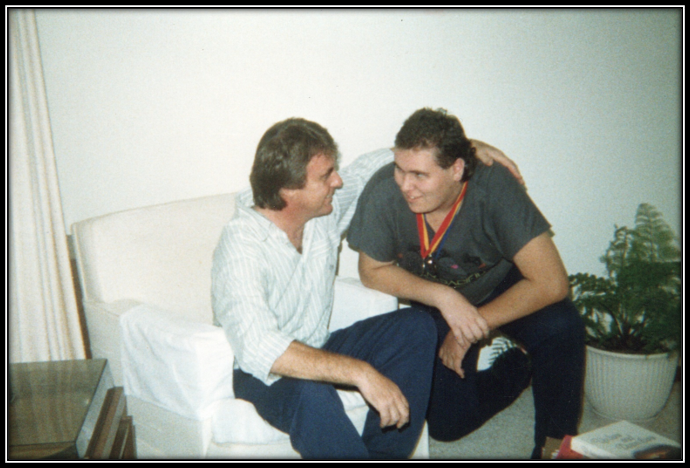 When Daniel was born, I was a largely absent father embroiled in my career within government agencies.

I was so absent that my wife took our six-month-old son and left.

I was gutted by both guilt and loss, but too immature and brainwashed to honour my greater responsibilities.

At the time, my ex-wife and I weren’t on good terms and I had little contact with Daniel.

As time went by, I matured, changed my career and re-friended with my ex and had more contact with Daniel.

They lived in Adelaide, South Australia and I lived in Perth, Western Australia.

By now he was attending a school for the blind.

Despite his condition Daniel was a bright lively lad and had a wicked sense of humour.

When Daniel was in his late teens, his mother who was by now Dan’s fulltime carer, had to go to hospital for an operation, so I looked after Daniel.

I was amazed at how he had developed his mind and adjusted to his situation.

Being blind, deaf without his hearing aids, and lacking energy, he was almost a prisoner in his own body.

His interest and curiosity about the world weren’t diminished in any way.

He listened to his television, scanning the channels to pick up whatever he could about worldly goings on.

He’d ask me about my life and my former career.  I’d take him for drives when he was up to it.   We developed a belated loving relationship.

Part of Daniel’s condition meant he’d have many operations to correct unusual bone growth, and was often in great pain, though you’d never have guessed it.  His courage was enormous.

Often people would promise to visit, then not turn up. Daniel forgave them, telling me they were probably too busy.  I cringed – just like I had been.

When Daniel’s mother returned from hospital, she was still too ill to look after Daniel, so I stayed on and looked after them both.

It was a healing time for us all.

We had the time to explain ourselves to each other, how we each felt about being abandoned, how I was sorry for my immature selfish absence, how both my ex and Daniel were understanding and forgiving.

When Daniel told me that no matter what had happened, he loved me anyway, I wept.

I remember sitting with Daniel one day and I asked him how he felt about his condition.  “It’s OK Dad, it is what it is.  I’m lucky I have a home; family and I enjoy myself.”

I asked, “What about missing what the world has to offer and not being able to experience all that?”

Dan smiled at me, his unseeing eyes flickering in my direction and said “Dad, I have the whole world in my head.  I imagine everything and to me it’s real.  I don’t have to go anywhere because I have it all in me.”

I felt I was listening to a Buddha.

I choked up with admiration and a mixture of relief, gratefulness and sorrow.

“You are very fortunate Dan, to realise that.” was all I could say in response.

When Dan turned 21 my parents, my brother, my partner and I travelled to Adelaide for Dan’s birthday.

It was one of the last times I’d see Daniel up and about.

There still aren’t places for young people to go towards the end of their life, only aged care facilities.

I’d get to Adelaide a few times a year to see Dan, though we had regular phone contact.  It was always disturbing for me to see Daniel lying between old people waiting to die.

Regardless, Daniel was always bright and happy.

By now my five-year-old daughter would often take the phone when I rang Daniel and they’d chat for ages.

Then the night before my daughter’s sixth birthday, my ex told me Daniel was dying.  He had pneumonia and his kidneys were failing.  There was nothing that could be done but keep him comfortable.

I couldn’t talk to him by phone.  I prepared to fly to Adelaide.  Before I could fly out, the day after my daughter’s birthday, Daniel passed.

He wouldn’t want to die on his sister’s birthday.  He didn’t.

My daughter gave me a drawing to give to Daniel.  “Put it in his box” she said, referring to his coffin.

The drawing was of her and Daniel holding hands on a sunny day surrounded by flowers.

At the funeral I was able to put my daughter’s drawing into Daniel’s folded hands.

I sobbed my way through delivering his eulogy.

Daniel taught me more about forgiveness, unconditional love, courage and the power of our imagination, than any other guru could have, because he lived those traits for his entire 29 years.

The deep learning that we are given by our loved ones often comes with their supreme sacrifice.