I observed the CEO addressing his five direct reports, all C-level executives.  It was their routine weekly update, a short loose agenda meeting, designed to keep each other in the picture.  No great detail was required, just a dashboard approach.

What dismayed me was the time the CEO took explaining what he thought, wanted, found, liked and didn’t like.  With five minutes to go he asked each member to give a quick update.  He listened in silence then said “OK, let’s go.”  Meeting over!   We went back into his office and he hadn’t planned to see his direct reports until the following week.

I asked him “What did you learn from that meeting?”  “Nothing that I didn’t expect, why do you ask?” he shot back. I paused and thought quickly “I could blow this coaching assignment if I don’t approach him carefully now.”   The board of directors had asked me to coach him, and he had accepted the offer, but I sensed just to appease the board.

“I was wondering what they might think, feel or add to your comments that you gave them, and whether that would be useful for you.” I said.   He looked at me in silence, stone faced.  Then a grin broke out as he said “OK, you got me, I need to break this habit of telling and ask more questions.  What can you do to help me?”

I nodded and thought “He’s quick, that’s great, this will work.”  We began. 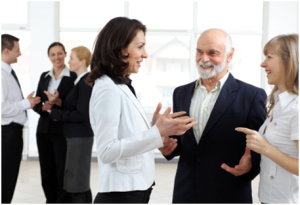 Time pressures, the large amount of actions that seem to pile up and the need to get things done quicker are some of the traps that let executives fall into the habit of telling.  Telling in order to save time.  Sometimes it’s a protective urge.  Sometimes it’s to feel in charge.   Sometimes it’s to avoid challenges to the situation.  Regardless of the reason, it is a sure path to shutting down communications that are of critical importance.

When we are telling, we learn nothing.  We can’t tell and listen at the same time.   We need to break the habit and ask more than tell, listen more than think of what to say next, and learn more about what our people are thinking, feeling, saying and doing.   The engagement is a two way street and we must lead it.

What ideas do you have about this problem of corporate communication and the role that telling plays?  I’m really keen to hear what you have to say.